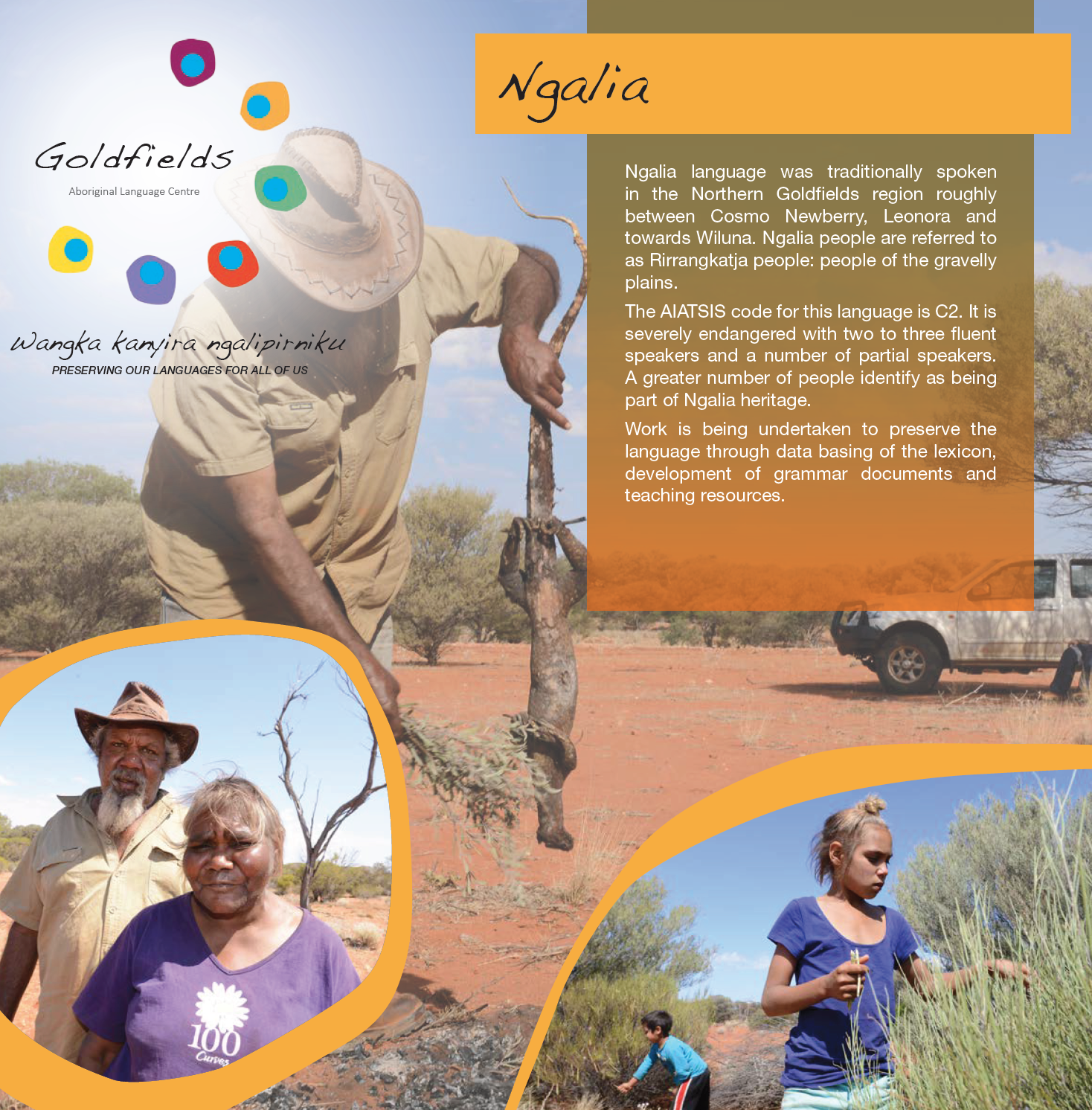 In the book Genealogy of a Ngalia Family, a Ngalia elder records, the different family groups associated with Mangkili and the surrounding territories of Ngalia people. Their community described as Ngalia consist of the descendants of key apical ancestors, and in some cases, dreamtime ancestors. As desert dwellers these people had extensive territories, often overlapping with their neighbours, across which each ranged. The range of Ngalia people extend from the deserts near Mangkili in the East to the salt lakes around Lake Wells, through to Lake Darlot and Lake Miranda in the West. To the south Ngalia country extends to Cosmo Newberry, across to Leonora, through to Lake Barlee then arbitrarily follows the rabbit proof fence up to Wiluna.

The current generation of Elders, say that their antecedents were reluctant to divulge, their true name to outsiders, but were happy to retain the descriptor or labels like language terms and geographic terms. Mantjiltjarra, meaning those with the word onmantjila in their language through to rirrangkatja, means from the stony plains.

In the Ngalia oral history the name Ngalia is used variously in sacred songs and even in general songs, like the song describing a place called Warru. In the dreaming a large carnivorous being lived at Warru, this being was what is known as a Tjangara. He would track down people and killed, maybe even two at a time before bringing them back home to his water at Warru to eat. He had no difficulty carrying two people, under his arms. The people decided to rid themselves of this troublesome creature, so they followed him back to his lair. The waterhole at Warru is deep in the rocks, and one must step down into a tunnel like hole to get at the water. Tjangara went down to drink, he lay on his stomach and put his lips to the water to drink, as he did so. The humans above started to rock the huge boulder, they intended to push down to squash and rid themselves of this monster. As he drank, Tjangara could hear the stone moving and small pebbles bounced around him. He made noises of annoyance, “Mahh!” As he thought the rocks were being dislodged by the small marsupials or wallabies, known as Warru, who resided at this waterhole, hence the name. He never bothered to look up. At last the people were successful and dislodged the huge boulder to come tumbling down upon the hapless Tjangara. He was immediately crushed to death, so severe was his death that is faeces were splattered all across the floor and walls of this waterhole to leave black stains on the rocks to this day.

There is a song that celebrates this victory at Warru. In one verse, the words, “Tjintjintji Ngalia paiyanu“, are sung. This translates as the Tjintjintji, small monkey like monster beings chastising the Ngalia people for the death of the Tjangara. This song is among many known by Ngalia people that link the Ngalia name to people and places in the Ngalia landscape. In a literal translation the term Ngali means us or we and the descriptor is said as Ngalia.

The Ngalia were called Rirrangkatja people. As mentioned above this meant the people of the gravelly plains. Ngalia was considered to be a secret word or name and was not used in pre-contact days. However, it has now become an accepted name. Other names and spellings include:

The AIATSIS code for Ngalia is C2. This is not to be confused with the Ngaliya C43 of South Australia nor the Ngalia dialect of Walpiri C15 of the Northern Territory. However, AUSTLANG states the following:

There is a Ngalia group in the Northern Territory and another similar sounding group in South Australia, Ngalea . Tindale suggests that the NT Ngalia group may have taken possession of the land they were found on:

‘Their visits to Winbaruku were by trespass in Jumu territory perhaps reflecting an older tribal disposition. Until after 1931 they had a four-class social organization but later changed to the system of the Walpiri with whom they mixed after that time…’

This apparent migration of Ngalia people into Jumu territory warrants investigation as to whether they may have been the same Ngalia people from Western Australia. Ngalia oral histories do speak of a tremendous drought many years ago when some of their people fled toward the east. Comparison of linguistic data will assist with identifying if this Ngalia group was, in fact, people of the Ngalia group of Western Australia.

The Ngalia language is spoken by the people in and around Leonora in the eastern Goldfields region of Western Australia. Ngalia has three speakers, the Muir brothers who are in their 40s. Some people are recallers and partial speakers although many others identify as Ngalia. Many people speak a local Leonora Talk which draws from several languages of the area. The term ‘Ngalia’ was not used until fairly recently as it was considered a secret word.

Mr. and Mrs. Muir undertook to record the language for their family around 2000. A significant record of words and phrases was made and is held by the family. Very few records of the language have been located with the odd reference in a number of documents and by linguists such as Tindale.

Funding was received under the Department of Arts Maintenance of Indigenous Languages and records program for the year 2011 to 2012 to begin work on the recording, analysis and preservation of the language through creation of recordings, a dictionary and a sketch grammar.

Kado Muir was the main informant for the language work with the records created by his parents providing a rich source of historical data. Zabar Muir has provided clarification on verbs.

Much work remains to be done on this language. Extensive recordings of natural speech, the development of the lexical database and writing of a full descriptive grammar are amongst the most urgent of the tasks yet to be undertaken.

A story in Ngalia by Kado Muir. 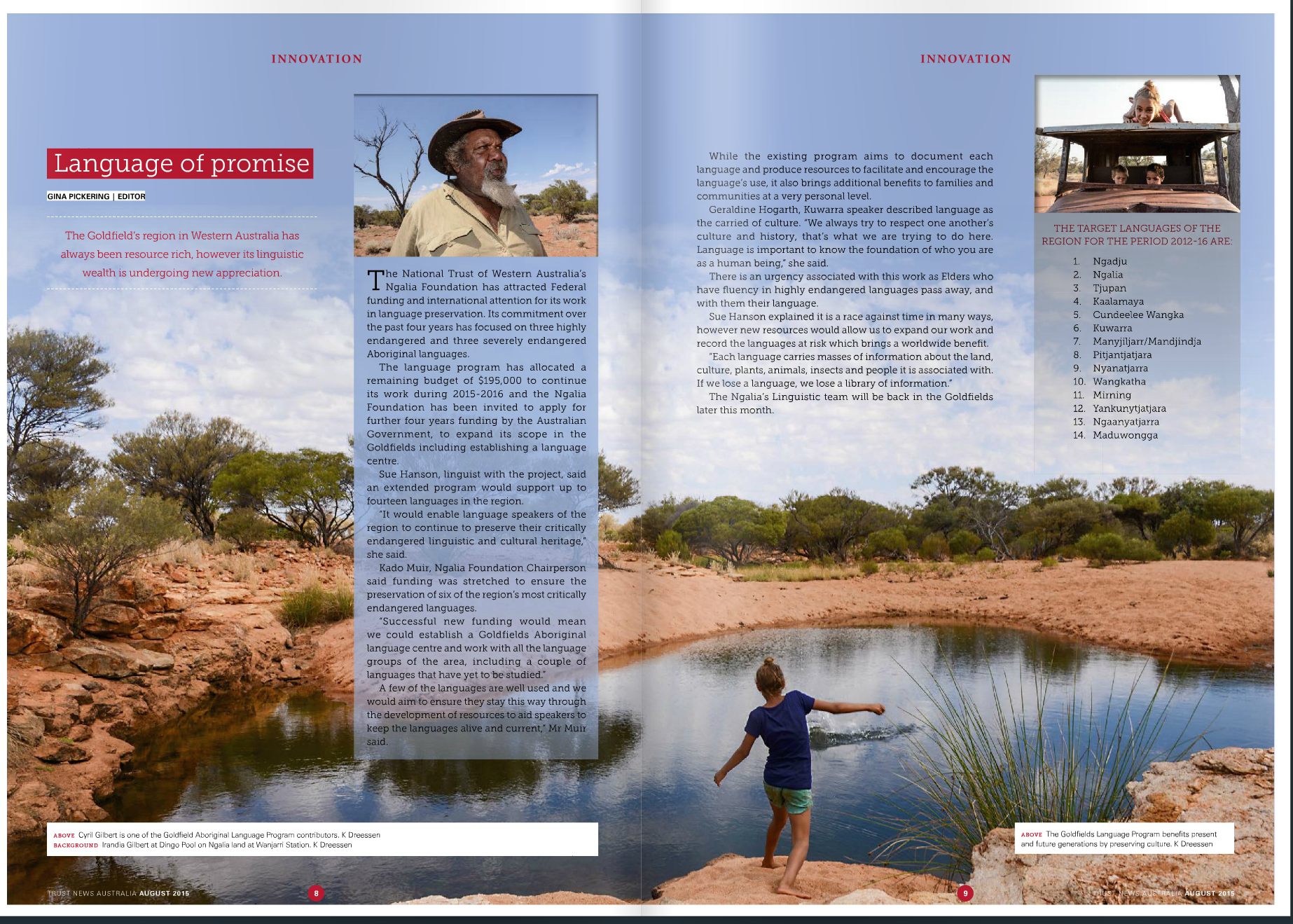