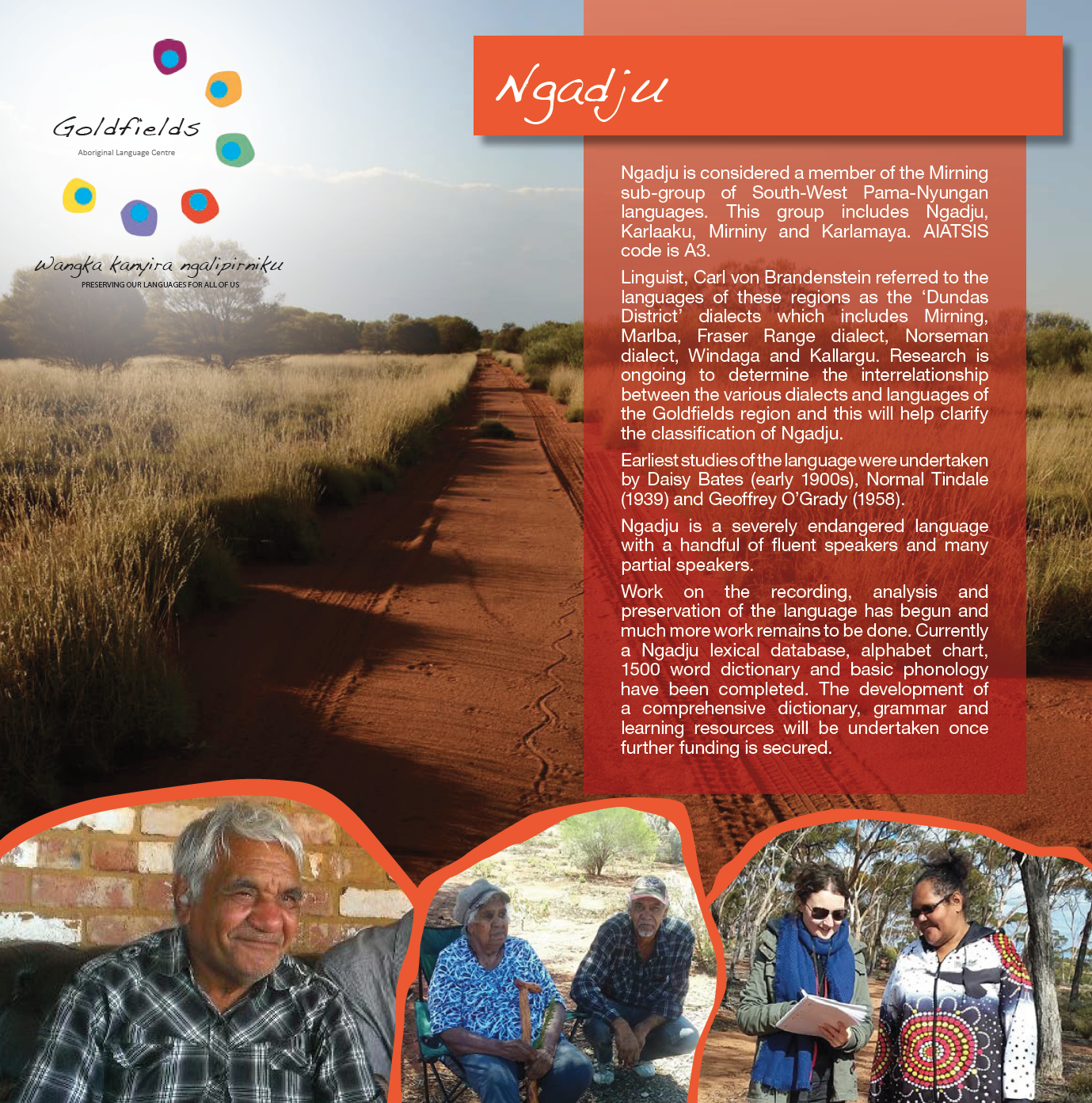 Ngadju is a language of the southern Goldfields region of Western Australia. There are very few speakers and these people are now spread across the Kalgoorlie region through to Esperance. Ngadju is centred around Norseman and east toward Balladonia.

Historical documents refer to the language as Karlaaku, Ngajunka or Ngajunkarra. Ngadju is a Pama-Nyungan language and appears to be of the Mirning/Ngadju family of languages.

The AIATSIS code for Ngadju is A3. The AUSTLANG database comment:

‘…maps Ngatjunmaya and Ngatjumay as separate languages but they probably refer to the same language, Ngatjumaya. uses the term ‘Ngadju’ to refer to a ‘mixed’ language consisting of formerly separate dialects: Mirningj , Marlba – which seems to be his equivalent of Tindale’s Ngadjunmaia (A3)- Fraser Range , and Kallaargu . Ngatjumay in appears to be the equivalent of von Brandenstein’s Ngadju. Sue Hanson mentions an unpublished sketch grammar written by Steven Roberts.’

A detailed language study of the language was undertaken by GALCAC linguist Dr. Marion Mullin over 2017-18. A phonology and sketch grammar were written and a dictionary which collates lexical items from historical documents cross referenced with speakers. These documents will be uploaded to this website mid 2018 and available.

As part of that phonological study, workshops were held with speakers and interred Ngadju people to examine the phonemic system and identify which letters should be used to represent the sounds. The writing of a standardised orthography has been approved by speakers and Elders. The alphabet uses the ‘j’ letting for the palatal approximate/glide. Previously, ‘dj’ was used. The approved and standardised alphabet now does not use the ‘dj’ any more.

However, Ngadju people have requested that the nation’s name stay written as ‘Ngadju’ as it has been widely adopted and recognised as such. For socio-linguistic reasons then, the name of the language and first nations group will continue to be written as ‘Ngadju’ using the ‘dj’ rather than just the ‘j’. This will be the only word in the language to use the ‘dj’ form.

The language is severely endangered, most existing speakers have little grammatical ability but significant lexical knowledge. Ngdaju was poorly documented up until GALC’s work of 2017 and the grammatical analysis was sketchy. Immediate fieldwork has assisted in the recovery and documentation of existing material and has greatly stimulated speakers to remember and potentially revive the language. A large number of partial speakers and people of Ngadju heritage have become very enthusiastic about reviving the language, as a consequence of the linguistic work being undertaken by Dr. Mullin and GALCAC linguists.

The Ngadju native title determination has also confirmed the status of Ngadju language as forming part of the traditions, laws and customs of Ngadju people.

Current Work on the Language

The first paper on the Ngadju language has been released by GALCAC. An Introduction to the Orthography and Grammatical Structure of the Ngaju Language was written by Marion Mullin and presented at the Dec 2017 Australian Linguistic Society’s annual conference as a paper. Note: The writing of the language name ‘Ngadju’ was determined by speakers prior to GALCAC’s linguistic work and is fixed using the past orthography with the dj spelling for the current j phoneme. The speakers have requested that the former spelling of the language name be retained.

GALCAC linguist, Dr. Marion Mullin (below at work), worked on the collection, linguistic analysis and databasing of the Ngadju language during 2017. The publication of a Ngadju dictionary is pending. The dictionary will contain a sketch grammar and some texts. Analysis and databasing of this language onto a Toolbox database is underway with over 1400 entries as of September 2017.

This beautiful, full-colour poster features 100 common words. Suitable for the classroom, home, office or anywhere people want to learn and use language.

Available in GALCAC’s online shop or from the Language Centre in Boulder, WA. $15 each. 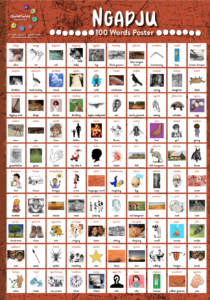