Cundeelee Wangka is a Pama-Nyungan language of the South-West group Ngayarta family. It is a dialect of the Wati family of Western Desert Language along with 40 or so other languages and/or dialects. Currently there is no AUSTLANG coding for the language. The language was spoken at Cundeelee Mission and became a homogenising sub-dialect of probably four other languages. Speakers have described the language as ‘southern Pitjantjantjarra’. It is a dialect of this language and an Aboriginal creole developed through the mission contact years.

Cundeelee Wangka is spoken by people in the locations of Wiluna, Warburton Ranges, Ernabella, Oldea, Yalata, Coonana, Tjuntjuntjarra and Kalgoorlie. There are thought to be a number of dialects of the language, but this needs further research to identify the locations, dialectical differences and features. It may not be possible any more to identify these dialects due to the homogenising process.

A dictionary is currently being written in collaboration between Dawn Hadfield and GALC. Stay tuned for the release of this book!

Printed alphabet charts on non-rip paper are available at GALC for $40 each. Excellent for classrooms or children’s rooms, these charts can we wiped and are very strong. 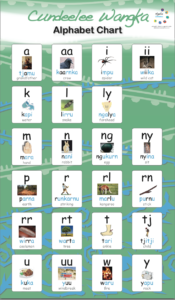 Use this chart to learn how to write Cundeelee Wangka words.

Printed syllable charts on non-rip paper are available at GALC for $40 each. Excellent for classrooms or children’s rooms, these charts can we wiped and are very strong. 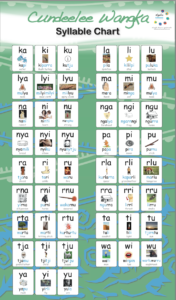 This chart will also be available at GALC office in a beautiful non-rip poster, later in 2020 for $40. Excellent for schools, home, clinics, offices and women’s centres! 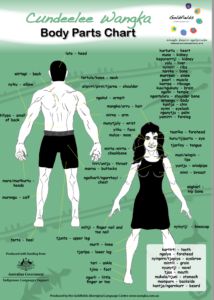 An A0 sized Cundeelee Wangka poster is available from the GALCAC shop for $15.00 with an associated USB of audios $15. A great poster for the classroom, work or home to learn a few key words in the language. 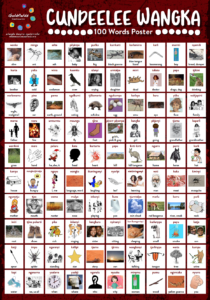