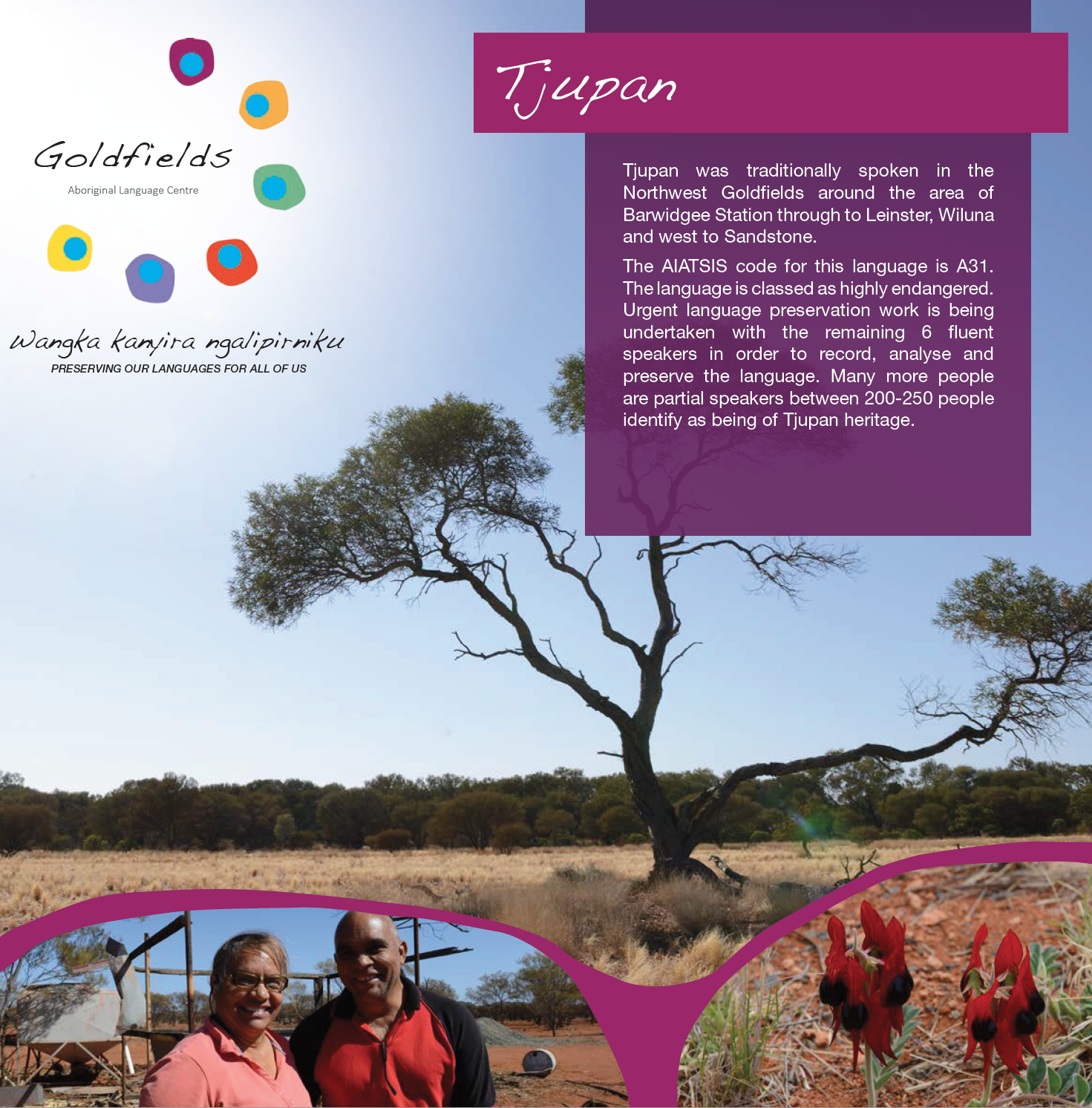 Tjupan language is from the Goldfields region in Western Australia. It is spoken by people in and around the towns of Wiluna, Leonora, Laverton and Kalgoorlie. The Tjupan people originated from the country north of Mulga Queen and across the area covered by the stations Darlot, Carnegie and Wongawol. It extends west to Sandstone, east of Agnew and Leinster and north to the town of Wiluna covering an area of 30 640 square kilometers.[1]

An ABC Open short film about Tjupan people going out for honeyants.

Tjupan has been referred to as:

‘‘According to Oates & Oates (1970:79), von Brandenstein made some recording at Meekatharra, and Marsh is doing depth study. Liberman (1978) treats Tjupany as a dialect of Western Desert Language , but he also questions whether it refers to a separate dialect. Jessica Boynton is doing research on Tjupany (in 2008). According to Hanson (Wangka Maya 2008) Tjupan (A31) has been referred to as ‘Tjalkati’, ‘Kuwarra’, and ‘Kurlujarra’. Horton treats Tjupany and Kuwarra as distinct dialects of Western Desert Language .’ [3]

The AIATSIS code for Tjupan is A31. Tindale equates Tjupan with Pinhi (pini). It appears that Pinhi is the term used by speakers to encompass a number of Western Desert dialects of the Goldfields region of Western Australia. [4] Doug Marmion in 2008 states:

‘It appears that at least some Tjuparn (sic) people use the form tjalkakarri or tjalka-kati ‘come here’, which Bates (n.d.b) records as used by Thuradha, who identiﬁed himself as Partuwangka, and which Tindale records as a feature of his Tjalkatjarra group.

A WDL informant said that tjuparn means ‘straight’, and derives from the expressiontjuparn wangka, ‘straight talk’, which would indicate that the speech variety being referred to is the people’s own, therefore in their eyes it is the proper, correct way to talk, therefore ‘straight talk’.’ [5]

It appears that quite a number of people (200-250) identify as of Tjupan heritage. These people are spread between Wiluna, Laverton, Leonora, Kalgoorlie and other towns and stations. The Tjupan’s relationship with traditional country appears to have been unbroken although some people were relocted to missions and stations for some time during the early European settlement phase.

Tjupan is a highly endangered language with very few fluent speakers remaining. A handful of people speak the language with some fluency whilst a great many are recallers. A greater number have a limited understanding of language or identify as of Tjupan heritage and speak other languages.

Currently few children are speaking or learning the language as a mother tongue.

In 2011-12, linguist Sue Hanson undertook a study of the state of the Goldfield’s languages. Tjupan speakers Shirley Wonyabong and Richard Narrier contributed words and phrases during the short study period of this project. Both speakers are very keen to see this work continue. Since 2012, Sue Hanson has worked with first language Tjupan speakers to document the language.

A thorough trawl of existing data was undertaken to locate items in historical material and records. Very few records of the language were located with a number of references made by linguists such as Tindale and Bates. 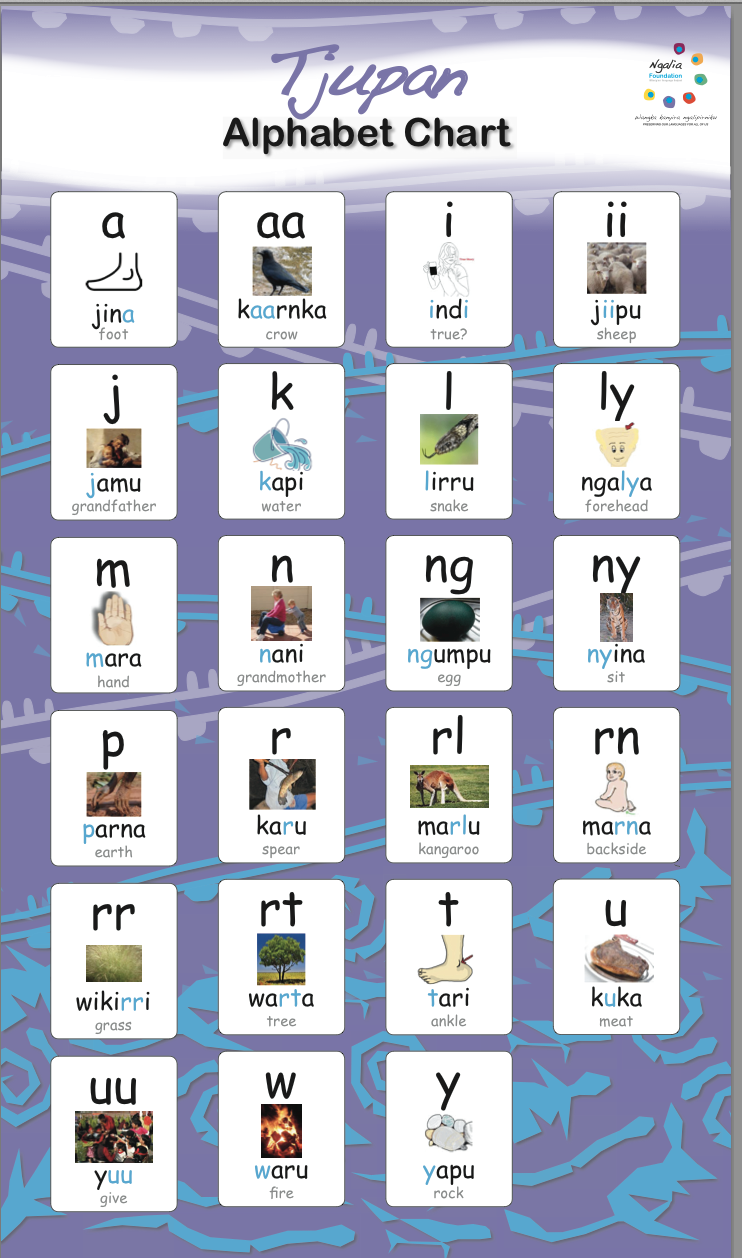 Tjupan Body Parts chart can be found here Rip proof charts are available at GALCAC for $40 each. 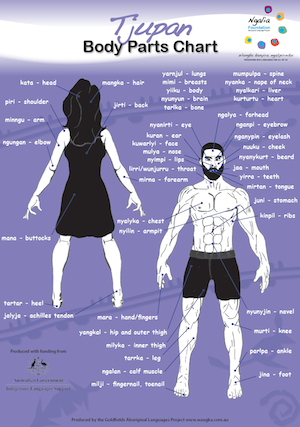 This full-colour, attractive A0 sized poster features 100 of the most common words in Tjupan. Suitable for the home, office, classroom or anywhere people want to learn language.

Available from GALCAC’s online shop or in the Language Centre in Boulder. $15 per poster and $15 per associated USB of audios. 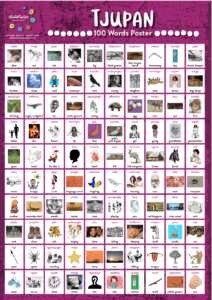 Tjupan films can be found on GALCAC’s YouTube channel: Wangka