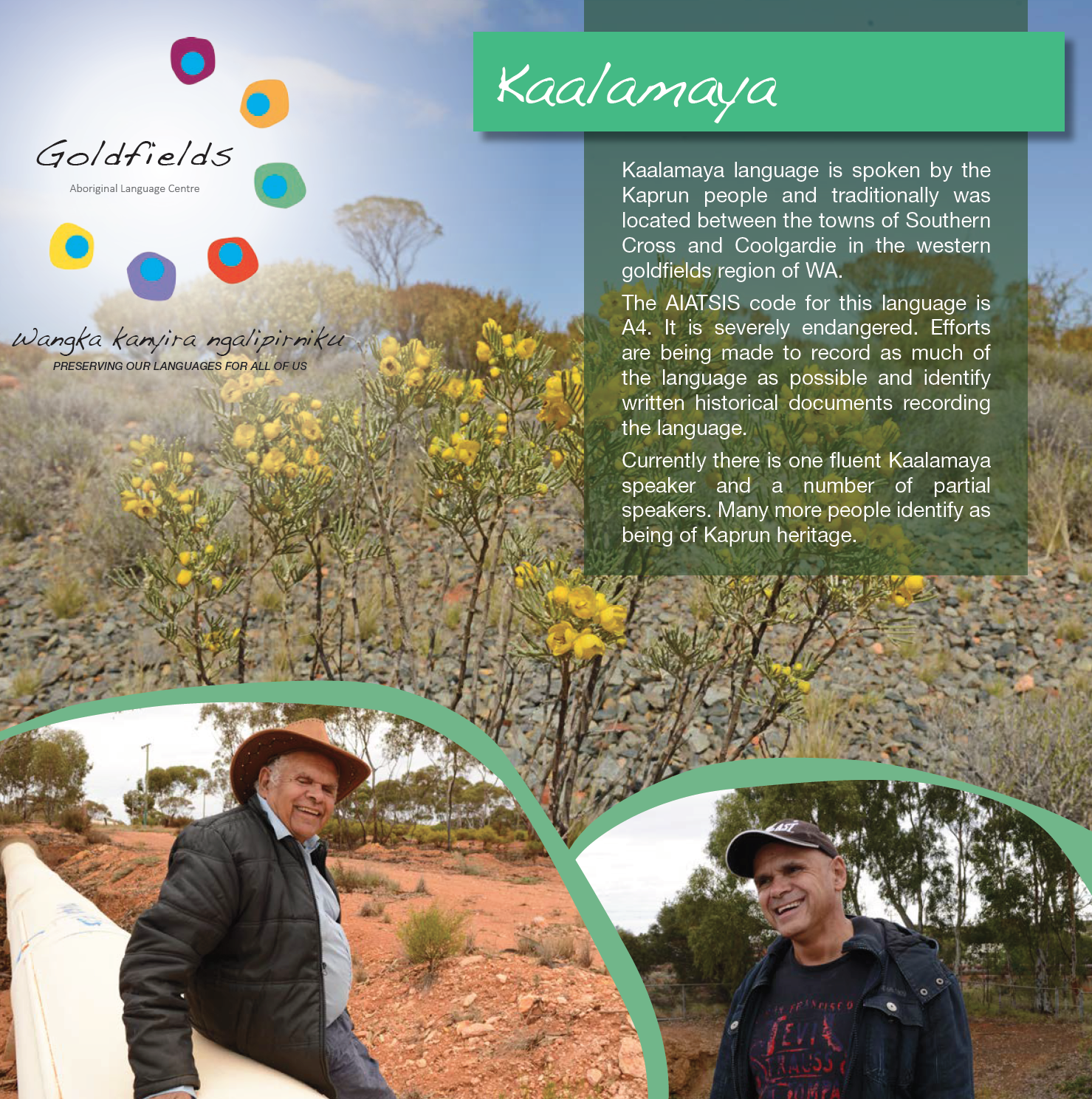 The Kaalamaya language is currently spoken by the Kaprun people in and around Kalgoorlie in the eastern Goldfields region of Western Australia. This is not the traditional country of the Kaprun. The Kaalamaya people originated from country roughly between the towns of Southern Cross, Coolgardie, Norseman and Kalgoorlie.

Norman Tindale in 1939 identified a language of WA’s Goldfields as being ‘Kalamai’. Tindale identifies the Kaalamaya (Kalamai/Kalamaia) country as being:

Location: At Boorabbin and Southern Cross; east to Bullabull-ing, north to Youanmi, Lake Barlee, and Pigeon Rocks; west to Burracoppin, Mukinbudin, Kalannie, and Lake Moore; south to about Mount Holland in the Parker Range. A term Jawan is applied to north-western portions of tribe from north of Mukinbudin. Co-ordinates119°0’E x 30°20’S Area 33,900 sq. m. (88,000 sq. km).

Records often show two languages from this area as being ‘Kaalamaya’ and ‘Gubrun’. Kaprun people explain that Kaalamaya is the language of the Kaprun people. The name Kaprun does not reflect correct spelling of the word as it is pronounced; however, it is the socially accepted spelling of the name for this group of people. There is debate on whether the language’s name is ‘Karlamaya’ or ‘Kaalamaya’. Current speakers pronounce the word as ‘Kaalamaya’ and therefore this is the way the language has been written.

Historical references to the Kaalamaya or Kaprun people can be found in:

The AIATSIS code for this language is A4, however, the following information about the language is on AUSTLANG:

‘The classification of this language is uncertain. Douglas (1968:3) treats this as the eastern dialect of Njuŋar (Nyoongar). Tindale and O’Grady list Natingero as an alternative name of Kalaamaya, but in fact Natingero appears to refer to another language. See Natingero.’

‘Natingero is listed as an alternative name of Kalaamaya by Tindale (1974) and O’Grady et al. (1966). However, according to Dixon (2007 p.c.), Natingero and Kalaamaya share only 43 % words. Thus, he treats them as distinct languages. Similarly, David Nash’s comparison of Adam’s word list ‘Natingero tribe’ in Curr to a word list of Kalaamaya gathered by Tindale shows only 36% words in common.’

Currently, Kaalamaya people are located in Kalgoorlie and South Australia. No Kaprun people currently live in Southern Cross and there appear to be a number of reasons for the migration away from traditional country.

The first was that the traditional land had a very small number of reliable and permanent water supplies. These water holes and supplies were kept secret and covered in a bid to preserve the water. However, these water supplies were used during the building of the railway from Perth to Kalgoorlie. Kaprun people were captured and often tortured to reveal the location of scant water supplies. The fate of these tortured people, once they revealed the water sources, is unknown but fairly predictable. It is highly probably tortured people not be set loose to retaliate. A newspaper article in the West Australian 1895 records the torture of Aboriginal people to reveal water supplies. Thereafter, it became clear that the people of the area disappeared rapidly either due to the loss of their water or for fear of capture and torture.

Secondly, once native water supplies were located, the railway builders and subsequently the pastoralists, fenced them off for railway and stock use only. Kaprun people no longer had access to their traditional water supplies in a very harsh, dry land. Records at the time show that water supplies were guarded against Aboriginal people and there is documented evidence of at least one massacre of Aboriginal people who dared to try and take water. The lack of water may have necessitated a move to stations, towns and other locations. Or possibly death from thirst.

Finally, the area experienced a massive gold rush in the 1890s and in a matter of months, upwards of 30 000 people flocked to the area. Water was unavailable and had to be carted hundreds of miles and sold at exorbitant prices. It’s highly probable that Kaprun people would have been unable to pay for the water. Death from thirst was common on the goldfields and it is very possible the Kaprun people may have suffered in this way.

Kaalamaya has one elderly fluent speaker. There are several partial speakers and a number of recallers in the Kalgoorlie area. Many more people identify as being of Kaprun descent.

Current Work on the Language

Kaalamaya Wordlist, Sketch Grammar and Stories and Toolbox database for Kaalamaya language have been produced. However current speakers have indicated that they are not yet willing to share these documents publicly.

These charts are also for sale at GALC office in beautiful non-rip posters for $40. Excellent for classrooms as they can be wiped down.